Every summer, my kids go to points north for fun and frolicking… They go to Camp Twin Creeks for a couple of weeks, then hang out with +Jim Patton and +Elaine Patton for a while… then off to see +Shawna Harrell .  Well, this summer was on different.  All good things must come to an end, which means I have to go pick them up.  No problems, right?

This year things were mildly complicated by a commitment to announce at the Outback Bikes Omnium at the Dick Lane Velodrome ( http://www.dicklanevelodrome.com ).  You see, the race ended at about 9:00 at night, I was facing about 1100 miles of driving (really, closer to 1200) and +Derek Patton needed to be at Space Camp at 7:15 am on Monday!  Challenge … ACCEPTED!

I finished at the velodrome and headed off to +Cindy Williams house where she was waiting for me.  A quick splash and dash (shower) and we were off.  Destination …. UNKNOWN!  Cindy took care of the Waze activity (http://www.waze.com – a tool so good that +Google just paid $1.1 billion for it and I drove the +Ford Motor Company  Edge rental car.  I do like that car!

We made it to Statesville, NC before we decided it was best to get some sleep.  About 2:00 am, we retired.  About 6:45 am… the alarm went off and one wacky day was about to begin.

The First "leg" of the day was plagued with rain and idiots in the left lane (there will be a lot of that discussion coming).  Simply put kids…. say it out loud and slow … DRIVE RIGHT =>  Pass Left <=  If you aren't passing somebody – MOVE OVER!  Thanks for listening.

About 20 miles outside of Dayton, I look up and see a bunch of brakes lights and realize something has happened.  We get closer and realize there is a cow sized deer in the middle of the road.  I've not seen a deer this big in person before.  It was HUGE…. unfortunately, it didn't cross at a "Deer X-ing" sign and it kind of got dead.  About 40 yards down the road there was a mini-van on the side of the road with some extreme front end issues.  That will change your thoughts on what you are doing this afternoon!  Felt bad for them.

We got to +Shawna Harrell house in Dayton, VA and had some pizza, exchanged pleasantries and off we went.  We made it all of about 1/2 mile before +Max Patton realized he left his phone behind so we went back… got that … here we go again.

The first 4 hours of the trip were relatively uneventful – we did find some traffic, we used the powers of +Garmin and +Waze to circumvent the traffic and find out more about Rural America… it was a nice detour, I will say that!

About 30 minutes from Greenville, we got a warning thanks to +Google … Severe thunderstorms – GREAT!  This wasn't our first storm of the day, wouldn't be our last either, but we could see the fury coming.  Sure, just add a few more minutes to this marathon!  We stopped to eat at Red Robin.  I used to love that place, but well…. it kind of went WAY down hill.  Things did kind of start getting entertaining though…. My burger had a grilled jalapeno on top.  I love hot stuff, so I took about 1/3 of this beast off in a bite and chewed it up.  HOLY HOT STUFF!  It provided entertainment to my travel companions!

Getting out of Red Robin, I felt energized, ready to go… 130 miles to go, let's make up some time… RIGHT!  I've been known to exceed the speed limit.  SURELY the Wazers have posted where all the cops were, right?  I quickly speed up and get my roll on… Less than a mile later I come around a curve and see a cop.  I don't know EXACTLY how fast I am going at the moment, I back out the the throttle and try to look inconspicuous in a full size SUV.  He starts moving and I know I am going to get to chat with the guy.  Yup… blue light special on I-85!  Apparently I was going 78 mph in a 60.  Why is the speedlimit so low?  (We already know why I was going so fast!)  I pull over and present my info quickly and am still amazed, I got a warning…

As I pull away from the South Carolina State Trooper I have obviously learned my lesson as I accelerate up to about 73 with him behind me… I realize it quickly and slow down and set the cruise control.  Cindy and I confer about the speed, the cop is still back there and I set my cruise control at 6x.  I don't remember exactly, I want to say 65?  Not sure… but this is FRUSTRATING to me.  I am being passed on both sides by all kinds of people.  Then … here come the insult to injury … I am sitting in the middle lane, a moral dilemma… an urge to go fast… I am discussing it with Cindy and a blue Toyota Prius (just like +Chad Bragg drives) PASSES ME!  Cindy is telling me to go slower and I say "GOOD LORD I AM GETTING SMOKED BY A PRIUS!".  It took Cindy about 15 minutes to finally stop laughing about that.  As the realization that I got a warning and pride isn't as big a factor as my manly self wanted it to be wore off, I began to realize exactly how funny that REALLY was.

We continue down the road… and Waze starts telling us about an apparently very bad traffic jam coming.  We discuss – detour? no detour? what to do… We decide NOT to detour, traffic is moving (sucker….) suddenly we stop again and we find this CHICKEN walking around on I-85.  You have to understand – I do have ADHD and I do have random thoughts.  I often, randomly say stuff about chickens.  It's what I do!  I have a shirt that says "They say I have ADHD but they just don't understand oh look a chicken!"  THIS IS TOO FUNNY!  We are in tears laughing.  I actually stop in the middle of I-85 to get a picture of this chicken!  (Don't worry, traffic caught up quickly… we were going 4 mph).  You also have to understand, Max LOVES animals.  He is WORRIED about the chicken!  He starts yelling "IT IS A SPECIAL CHICKEN!"  He wants to go back and GET the chicken!  Thankfully I convince him it is a special chicken, with special FREEWAY WALKING powers!

It's great to have my boys back, my co-pilot helped keep the trip fun… Never really a dull moment!  I'm kind of thinking about looking into plane tickets next year! 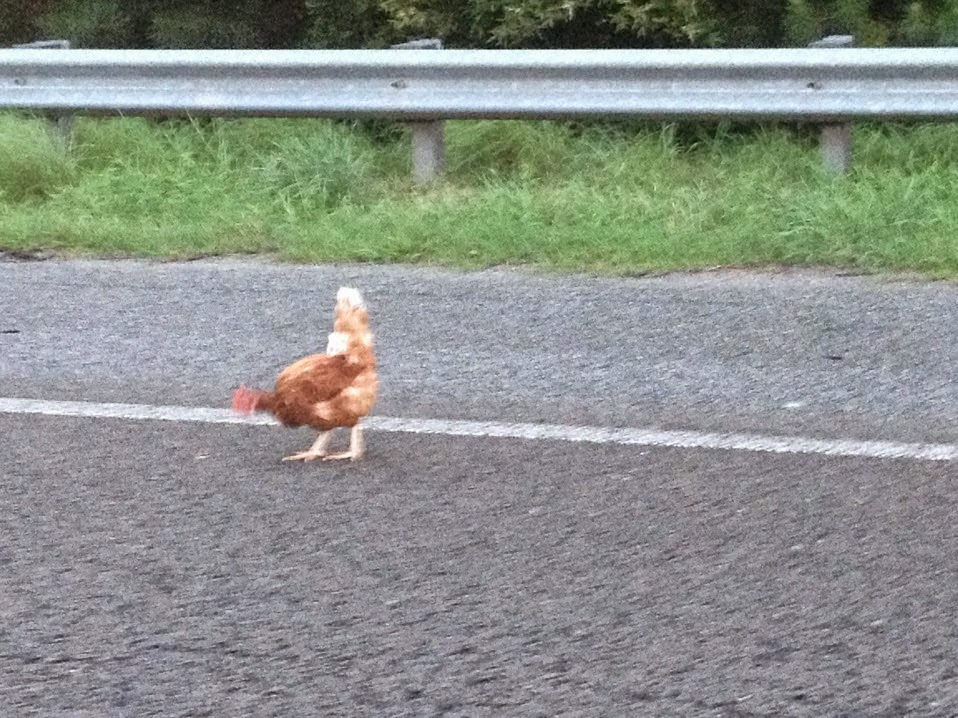